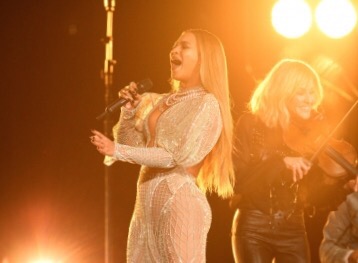 CMAs Get Highest Ratings Ever For 5 Minutes Beyoncé Was Onstage
Published by admin Published on November 3, 2016

Country music fans were shocked when pop star Beyoncé made a special appearance at the 50th annual Country Music Awards. Though Beyoncé isn’t the most obvious fit for the CMAs, she blew people away with her performance of the country-tinged “Daddy Lessons,” from her most recent album. With her rabid fan-base, Bey attracted a huge audience for the awards show, giving them their highest ratings in 50 years, for about 5 minutes.

Though country music has a large audience, the CMAs have never been able to equal the numbers of more mainstream awards shows. But from 8:47pm to 8:52pm, the CMAs ratings increased by a staggering 6,000%.

As soon as the performance was over, ratings immediately plunged even lower than earlier in the evening. This is likely because after watching Beyoncé, everything else pales in comparison, so what’s the point?

The CMA’s producers are now seriously considering making next year’s ceremony a Beyoncé concert with small breaks between songs to give out awards.

Also, The Dixie Chicks were there!
Source