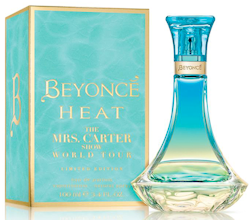 The “Run the World (Girls)” hitmaker’s fragrance range, launched in 2010, includes six scents, and it is said to have been sold more around the world than those launched by any other popular brand, reports femalefirst.co.uk.

The most recent fragrance released by the star was a limited-edition Heat to commemorate her Mrs. Carter Show world tour, which is currently on a break.

The perfume, a mix of florals, vanilla, sandalwood and acai, was packaged in a turquoise glass bottle and designed to capture the “power, passion and playfulness” of Knowles’ shows.

“I love my music, I love performing and most of all I love and appreciate my fans. I wanted to give them a special remembrance of this tour and I created this scent to reflect the power, passion and playfulness I put into my performances,” Knowles had said.